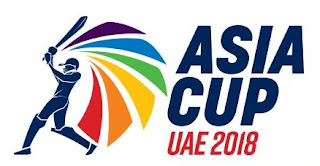 
Barbados Tridents(BT) find themselves at the bottom of the table after a series of poor batting performances. For a team that has a very good batting lineup and has been playing at home recently, these results are unacceptable. They will be playing against Guyana Amazon Warriors(GAW), a side that had done much better in the tournament will be hoping to win this game and move up to the top of the table.

BT defeated GAW by 30 runs when these two sides met earlier in the ongoing season. GAW have won four of the last five games they have played against BT. BT are coming off three consecutive defeats and this is going to put a lot of pressure on them. Play fantasy cricket and Earn Money at www.pick5cricket.com.

HURRY UP! Create your best Fantasy teams for ‘Barbados Tridents vs Guyana Amazon Warriors' & Join leagues before the deadline closes!


The troubles for SLS do not seem to end as their low net run rate has been docked further due to slow over rate. Already at the bottom-most spot in the points table, the penalty couldn't have come at a worse time. They'll not only need to win in their remaining matches but also win those with a big margin. Up next they are set to face SNP, who lost to GAW in their last match. With a need to win every match from here, it will be a do-or-die game for the SLS and we expect them to go all out on 30th August at Basseterre.

It's going to be one of the most interesting games of the tournament, as far as qualification to the next round is concerned. The SLS are at the brink of an elimination and the SNP could get into a similar position should they fail to lose this game. Despite a strong batting lineup, the SLS have failed to win on multiple occasions much largely due to the absence of an experienced bowler in their attack. We believe that the likes of Chris Gayle and Evin Lewis are likely to make use of that fact and will be tough to handle for the SLS bowlers. For the above-mentioned reasons, SNP are at a higher chance to win in the upcoming contest. Play fantasy cricket and Earn Money at www.pick5cricket.com.

HURRY UP! Create your best Fantasy teams for ‘St Kitts and Nevis Patriots vs St Lucia Stars' & Join leagues before the deadline closes! 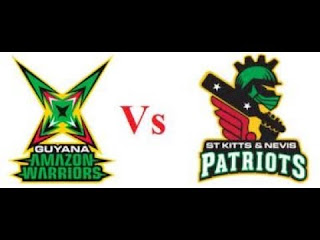 Select your 5 Players and Join the League to Win Cash!

St Kitts and Nevis Patriots bounced back into the top half of the points table with a close win against Barbados Tridents. They have a particular good net run rate of 0.784 understandably so due to the presence of power-hitters in Chris Gayle and Evin Lewis at the top of the order. A win in their next match, against Guyana Amazon Warriors, will not only take them out of the middle-order crowd but could possibly take them to the top of the table if the margin of their win is big enough. They'll lock horns with the Warriors on 28th August at Basseterre.

Both the teams are in a pretty similar spot with three wins in five games. Both will be looking to get ahead with a win to avoid last-minute competition for the top-four spots. With a strong batting lineup including Chris Gayle and Evin Lewis an having garnered some momentum with a win in their last match, the Patriots appear to be better placed to win the upcoming encounter. 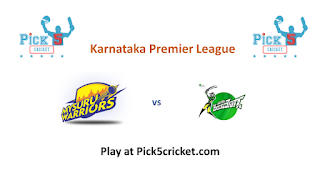 
Karnataka Premier League has once again picked up pace since we've moved to the third leg of the tournament, being played at Mysore. Mysuru Warriors finished second in their second game of the tournament as they fell short by a margin of merely three runs. They take on Shivamogga Lions in their next game who are languishing at the bottom of the table and need a win to stay alive in the competition. A win for Warriors, on the other hand, will push make the Lions stronger candidates for the wooden-spoon and brighten their own process as far as qualification is concerned.

Both the teams started off their campaign this year around the same time. While Mysuru Warriors have looked a little at ease, Lions have already had a couple of tough defeats to their name. With a better team balance and good form in the tournament thus far, Mysuru Warriors appear to be better placed to win this upcoming encounter.

Join For All Matches In Caribbean Premier League(CPL) T20 League From 24th August to 16th Sep. This CPL we have got some Exciting Prizes! for the Top 3 Winners with 50 + Wins Gets T-Shirt with their names printed. 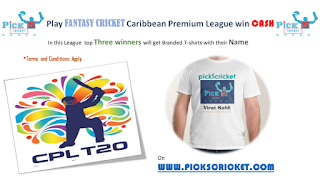 
Tired of playing 11 player fantasy cricket, if you don’t have time to research on 11 players statistics, you have an opportunity to show your cricket skills and expertise to pick only 5 players in this uniquely designed match-up based fantasy cricket game PICK5CRICKET.COM.

PICK5CRICKET.COM is one of the most unique fantasy cricket websites to play the fantasy games online. Show your expertise, win money and get bragging rights.
- August 27, 2018 No comments:


Afghanistan outplayed Ireland in the second T20 international and their confidence would be sky high after having clinched the series already. Ireland have plenty of issues to resolve in their batting department and they need to find a way out to counter the spin threat from Afghanistan. Ireland have now lost their last seven T20Is against Afghanistan and it won't be easy for them to lift themselves up knowing that the series has already been lost. Play Fantasy Cricket and Earn Money at www.pick5cricket.com

Match is going to start in few hrs between Ireland vs Afghanistan. Guys Hurry up! Start your game with your entry. Win Real Money from 100 -1000 rs. Here there is no restrictions on selecting the Players. Click on the below link to join the league!
Link is: https://www.pick5cricket.com/
- August 23, 2018 No comments:

Fantasy cricket is a part of the fantasy sports genre. It is an online game in which a virtual team of real cricket players is created and points are scored depending on how those players perform in real life matches. To win a tournament, players must work towards attaining the maximum points and the highest rank on the leaderboard.

Fantasy cricket is classified as a "game of skill", similar to fantasy sports in the United States. Fantasy Cricket for Cash is at the hub of three dynamic industry spokes – Internet, gaming and cricket.

A fantasy cricket league is a group plays together. Each can register individual teams and then compete to see who wins the maximum fantasy cricket points and thereby the league. These leagues are very popular during major Twenty20s like IPL t20. Play fantasy cricket and earn money at www.pick5cricket.com.
- August 23, 2018 No comments: 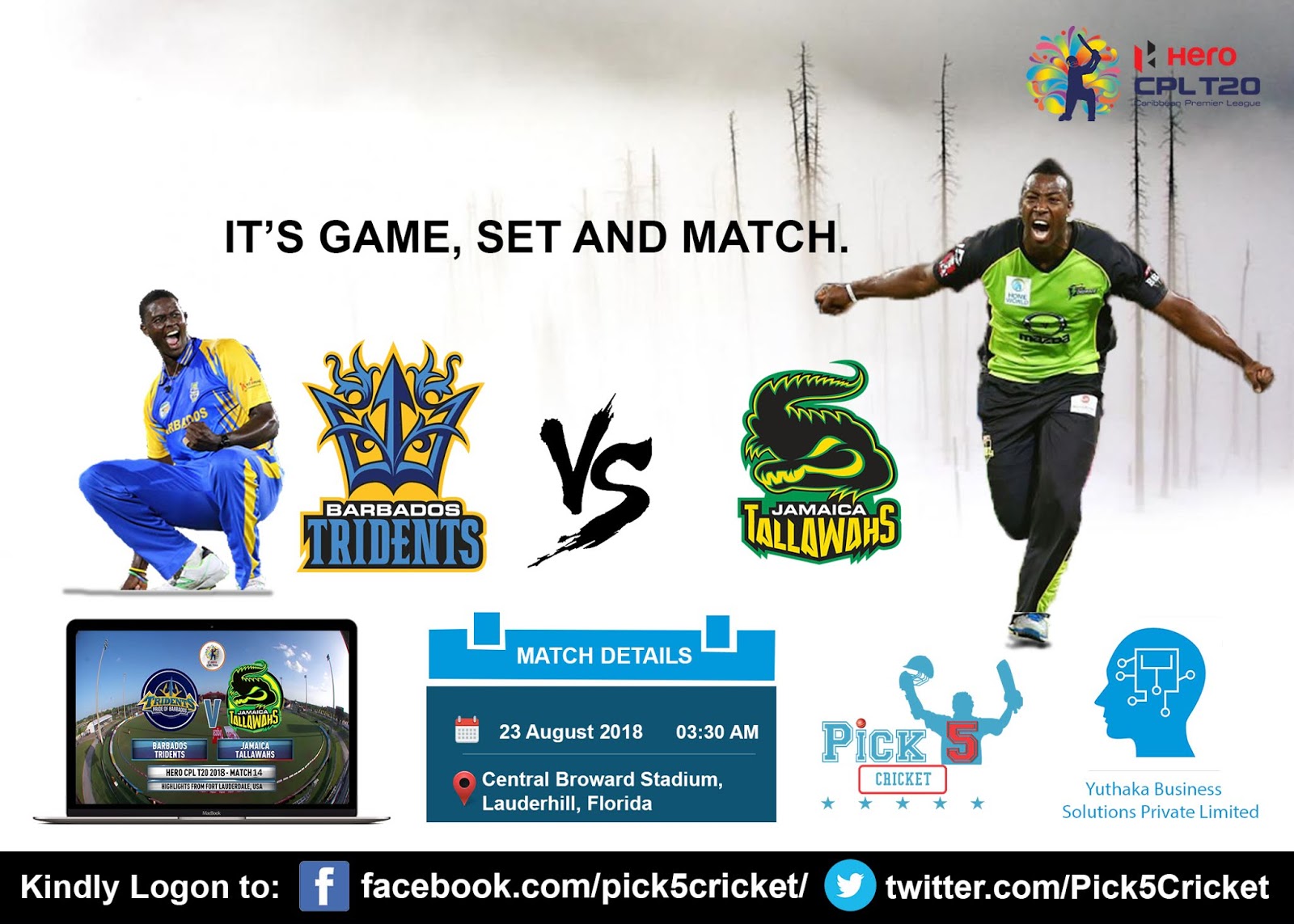 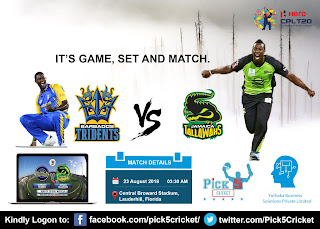 All cricket lovers CPL 14th Match is going to start by 23/08/2018 at 3.30 am between BarbadosTridents vs JamaicaTallawahs. Guys Hurry up! Create your pick5cricket Fantasy Cricket team. Start your game with Free Entry and Win Real Money from 100-1000 rs.
Here there is no restrictions on selecting the players. You can select your Favourite 5Players from live match. All The Best! Click on the below link to join the league!
Link is: https://www.pick5cricket.com/


Afghanistan will be high on confidence after their win in the opening game while Ireland will be under pressure to keep the series alive. Afghanistan have now beaten Ireland eight times out of eleven in the 20-overs format, including their last six T20I encounters. Ireland don't have a win in their last four T20Is and they have now lost all their four completed matches at this ground. Play fantasy cricket and earn money at www.pick5cricket.com

Match is going to start in few hrs between Ireland vs Afghanistan. Guys Hurry up! Start your game with your entry.Win Real money from 100-1000 rs. Here there is no restrictions on selecting the Players. Click on the below link to join the league!
Link is: https://www.pick5cricket.com/ 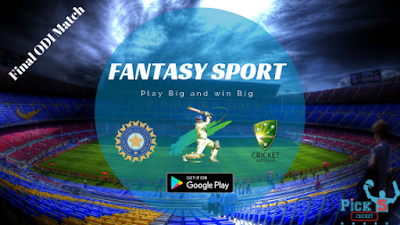